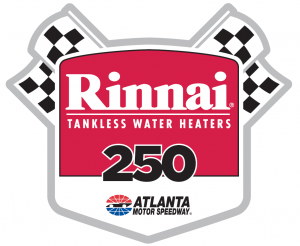 The NASCAR XFINITY Series is a stock car race under the NASCAR (National Association for Stock Car Auto Racing) banner. The 2017 XFINITY Series, which takes place at Atlanta Motor Speedway, will run under a new name—Rinnai 250—with the green flag dropping at 1:30pm on March 4.

Under the NASCAR XFINITY Series sponsorship agreement, Rinnai America is allowed to display the Rinnai logo at the racetrack. Even better, perhaps, is the potential to showcase products, as the company will be allowed to install Rinnai-made tankless water heaters for shower rooms inside a race-affiliated hospitality tent. Guests at the racetrack will be able to take a shower here and experience first-hand the advantages afforded by tankless water heaters.

Rinnai and Rinnai America will utilize the NASCAR XFINITY Series sponsorship to raise awareness of the Rinnai brand and promote greater use of high-energy-saving tankless water heaters.