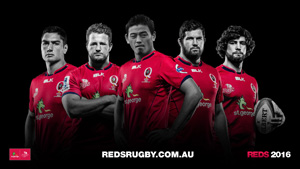 The Reds, a member franchise of the Super Rugby , comprised of elite rugby teams mostly in the Southern Hemisphere, are based in Brisbane, Queensland, with home games played at Suncorp Stadium. The team has a long tradition, dating back to the Rugby Union in Queensland, formed in the 1880s, and is one of the most popular clubs in Super Rugby competition. The Reds made headlines recently with news that Japan’s Rugby World Cup hero, Ayumu Goromaru, had signed with the team for the 2016 season.

Super Rugby is an international league under administration by a union of rugby boards from four countries—Australia, New Zealand ,South Africa and Argentina—dubbed SANZAAR (South African, New Zealand, Australian and Argentinian Rugby). The league will expand for the 2016 season, with the addition of a team from Japan and another from Argentina and a sixth team from South Africa, under a five-country, 18-team format. The inclusion of Japan in Super Rugby 2016 will naturally fuel interest in Japan, but the wider sphere of participation will surely raise the league’s profile all over the world.

The passion of players giving their all in competition inspires spectator enthusiasm—an emotional transfer of heat—and by extending this sentiment to lots of people through sponsorship of the Reds, Rinnai and Rinnai Australia are, in a figurative sense, conveying the Rinnai ideal of making people happy and comfortable through heat.

Rinnai is happy to supports the Reds for the upcoming season. Good luck in Super Rugby 2016!