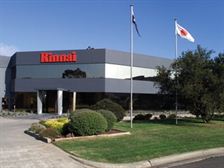 Rinnai Australia Co., Ltd., held a party to celebrate the 40th anniversary of establishment of Rinnai Australia and achievement their annual sales of $200 million on March 1, 2012 in Melbourne city,.

Rinnai Australia Co., Ltd., was established through the acquisition of a British manufacturer of gas equipment company Parkinson’s, Inc., which was once affiliated, in 1971. Rinnai Australia has headquarters in Melbourne, Victoria and has started selling from heating equipment.

After starting of sales in instantaneous gas water heater (tank-less) in 1991, Rinnai Australia has been expanding its products as an industry leader in innovation. Since when the electric heating water heater and hot water storage market was the mainstream, now the instantaneous gas water heater has spread to about 30% in account.
In recent years, Rinnai started in production of hot water storage tank and solar panels by the acquisition of Beasley company which was a production company of hot water solar panel in 2005. Rinnnai offers a versatile solution such as further sales of hot-water supply system designed for large scale commercial facilities, as the total thermal energy equipment manufacturers.

Australia is famous as a country with rich natural environment in the vast country, but in recently, the amount of precipitation is significantly changing, there are regions where drought exists, on the other hand there is a region hit by the floods. Country greatly affected by the climate change. Also people’s awareness for the environment issue is growing. 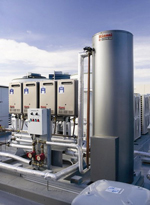 Since Australia is abundant in resources such as coal and natural gas, there used to be a less interest in energy sources with low CO2 emissions and improve the efficiency of low energy consumption before. But nowadays the awareness of global environmental protection is growing and the anxiety about climate change is on the rise, Australia became the advanced country to promote environmental policies in the world.